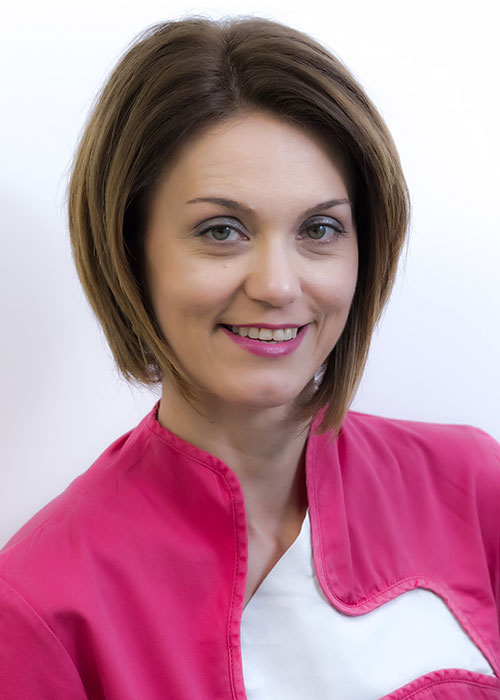 Dr. Berović Kačan was born in Zadar in 1973, where she attended elementary and high school. She graduated from the Faculty of Dental Medicine in Zagreb University in 1998. Specialization from dental prosthetics begins in 2002/03. at the Department of Prosthodontics at the Faculty of Dental Medicine of the University of Zagreb, and in 2006 she passes the specialist examination and obtaines the title of Specialist of Dental Prosthetics.
She is a member of the Croatian Dental Chambers, the Croatian Society for Dental Prosthetics, the Croatian Society for Dental Implantology and the Croatian Medical Association.
After specialization, she works as the head of the office of prosthetics in Nika polyclinic in Zadar. In 2016 she opens her own clinic ZARA DENT at new location and continually improving at domestic and foreign congresses and workshops. 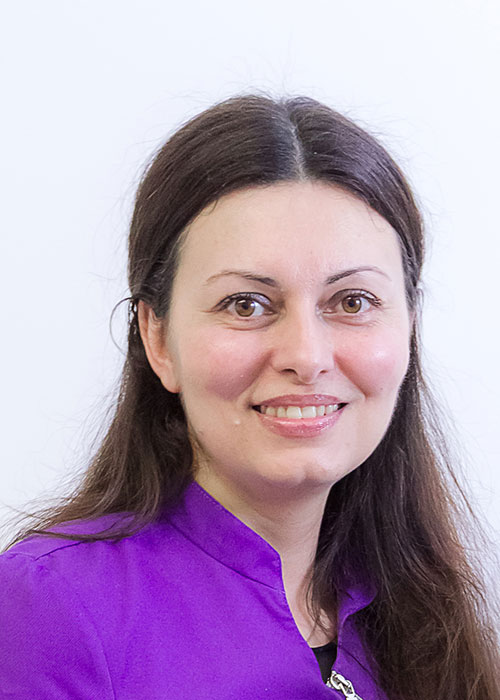 Kristina Režan was born in Zadar on June 6th 1990. She finished high school for medical professions „Ante Kuzmanić“. She did her internship at Zadar General Hospital. After that she worked at Zadar County Centre for Emergency Medical Services, and then at Zemunik Nursing Home for three years. In June 2020. she started working as a dental assistant at Zara Dent Dental Office.

Born in Zagreb in 1972, graduated from the University of Zagreb School of Dental Medicine in 1996; in 1999 got the Masters degree and in 2006 doctor’s degree. During 1997 and 1998 he attended the Department of Oral Function at the Academy of Dental Medicine in Amsterdam, Netherlands as a scholar of Nuffics and MZT, participating in the research and development project "Kinematics of the Human Jaws". In 2001 he was appointed as scientific novice, 2002 for Assistant, 2005 for Senior Assistant, 2007 for Assistant Professor and 2013 for Associate Professor at the Department of Dental Prosthetics at the Faculty of Dental Medicine, University of Zagreb. From 2002 to 2005 he specialized in the Clinic for Dental Medicine of KBC Zagreb, and completed a specialist examination in dental prosthetics in 2005. He has been active in many international and domestic conferences through posters and oral presentations. He has published several scientific, scholarly and professional papers in domestic and foreign journals. He is the owner of a patent for bioactive TiMg composite metal (BIACOM). He participates in the work of training courses in the field of dental prosthetics, fixed prosthetics and implantoprosthetic rehabilitation. In 2013 he has created and, since then, has been conducting courses of continuous education in the "Enter-Insert-Control" implant pathology. Since 2007 he has been conducting the series "3,2,1 Go!"courses from the basis of fixed-prosthetic therapy.
He is the winner of the award for scientific work by IADR and EPA. From 2012 to 2016 he was the secretary of the Croatian Dental Prosthetic Society and since 2016 a member of the Supervisory Board of the Company. He is also a member and a vice-president of the Croatian Society for Dental Implantology, a member of the European Protest Association, the International Organization for Dental Research (IADR), the European Association for Osseointegration and the Global Institute for Dental Education. In the period of 2012 to 2015, Prof. Čatić held the post of Head of the Institute for Fixed Prosthetics at the Faculty of Dental Medicine, University of Zagreb.